Discover how the ARK crystal works

A remarkable achievement has been realized in the field of crystal technology with the first-ever development of the Advanced Resonance Kinetics (ARK) crystal. ARK crystals are precision engineered to specifically interact with the zero-point dynamics of the vacuum to link with and harness the energy and information of this primary quantum field.

Empirical investigations have demonstrated the high efficacy of this resonance-based technology: ARK crystals have been shown to have significant effects on water structuring, increasing system coherence and optimizing biology for growth and vitality.

ARK crystals have been precision engineered so that they will couple to vacuum fluctuations when brought into molecular harmonic resonance interactions via the acoustic, electromechanical, and electromagnetic plasma oscillator of the Harmonic Flux Resonator.

Following the unified physics principles of inventor and physicist Nassim Haramein, a precise dimensional ratio was found in which the tetrahedral ARK crystals would form optimal harmonic resonances with vacuum-coupling acoustic and electromagnetic frequencies. These structural and dimensional characteristics appear to endow the ARK crystals with a profound ability to link with the non-local entanglement network and energetic dynamics of the quantum vacuum.

Scientists have discovered that when all classical sources of matter and energy are removed, creating what is referred to as a vacuum, there is still energy present, even at absolute zero. This discovery has redefined empty space with the definition of a quantum vacuum – a substantive quantized medium filled with harmonic zero-point energy oscillations. This sea of continuous energetic oscillations has now been identified by some physicists as the elemental source of all mass, form, and structure.

The quantum vacuum must have coherent modes of oscillations in order to give rise to mass, form, and structure. Indeed, the geometry of these oscillation modes are now being discovered by scientists to have very fundamental functions at the base of reality and that this constant flux of quantum energy is intrinsically and integrally entangled. This universal network of the vacuum harmonic oscillations of the zero-point field can be considered as information exchange in innumerable quantum computational units, or Planck spherical oscillators, where each Planck sphere is one bit of information. It is this unified spacememory network that informs and connects all things to produce coherence, order, and systems intelligence.

Resonance-based technologies are a way to tap into the vital source of quintessential energy that has been identified as the source of the material world, called quantum vacuum energy. Replicating the magnetohydrodynamics naturally occurring in a variety of astrophysical objects, which couples plasma modes to the harmonic structure of the quantum vacuum — the Harmonic Flux Resonator (HFR) replicates and transfers quantum energy.

ARK crystals have been designed and precision-engineered, based on 30 years of research, to couple with the same dynamics as the HFR, enabling this remarkable technology to link with the nonlocal entanglement network and energetic dynamics of the quantum vacuum. Once activated by the HFR, ARK crystals can be used to increase coherence and vitality in almost any system placed in their active proximity.

Click here to learn more about the underlying technology of the HFR.

The water molecule has a tetrahedral geometry, just like that of quartz (SiO4), and the fundamental geometry of spacetime — enabling a significant structural resonance between these quintessential domains. It is perhaps no coincidence then that 90% of the Earth’s crust is silica (such as quartz), and 71% of the surface is water. The dynamic energetic interaction of these two substances comprising most of the surface is one reason Earth is such a hospitable place for life to thrive.

ARK crystal technology represents a distillation and refinement of this natural beneficial interrelationship of quartz and water. Extensive testing of ARK crystals shows that there is a significant interaction that gives water a supercharged effect, resulting in up to 200% greater growth rate of plants, immune-boosting resistance to disease, and improvements in numerous markers of health and wellness. ARK crystal technology harnesses vacuum energy to bestow increased health and life-supporting qualities of water.  See our laboratory report

ARK crystals are a revolutionary technology that greatly boosts the body’s natural ability to attune with the vitalistic and expansive zero-point field of the quantum vacuum. The quantum vacuum represents the revelatory understanding in modern physics that space is not empty; on the contrary, it is the one thing that connects all things.

The zero-point field of space is a nexus of quantum entanglement, and when the body is able to attune with it, like a crystalline oscillator, it comes into harmonic resonance with this inexhaustible source of energy, coherence, and connectedness. This is demonstrated by the ARK crystals in the numerous tests that have shown their effects in optimizing biological functions, allowing the cellular system to communicate more coherently, facilitating rejuvenation and optimization of function. 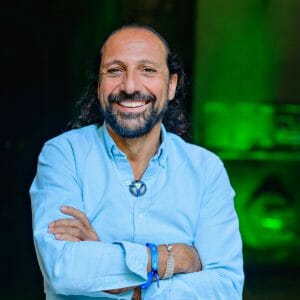 ARK Crystal LLC was formed in 2017 as a subsidiary of Torus Tech LLC the private research and development company founded by physicist Nassim Haramein. ARK Crystal LLC is the exclusive manufacturer of the ARK crystal and exclusive licensee of the Torus Tech Harmonic Flux Resonator technology for the use of charging quartz crystal.

These studies lead Haramein to groundbreaking theories, published papers and patented inventions in unified physics, which are now gaining worldwide recognition and acceptance. Haramein’s findings are focused on a fundamental geometry of space that connects us all; from the quantum and molecular scale to cosmological objects in the Universe. In Haramein’s paper, Quantum Gravity and the Holographic Mass, a prediction of the charge radius of the proton was confirmed with greater accuracy than any other theoretical framework. An experiment performed in 2013 by a team of scientists at the Paul Scherrer Institute, confirmed the prediction.

In 2004, Haramein founded the Resonance Science Foundation (formerly Resonance Project Foundation), whereas the Director of Research he leads physicists, mathematicians, and engineers, in exploring unification principles and their implications in our world today and for future generations.

In the fall of 2014, physicist Nassim Haramein began The Resonance Academy Delegate Program; the first and only unified physics program of its kind, educating thousands of students from over 90 countries around the world.

In 2015 Haramein opened Torus Tech, LLC, a private laboratory where he serves as the Chief Executive Officer. Here, Haramein leads teams of scientists and engineers applying his revolutionary theories and patents to resonate technologies that focus on vacuum energy and gravitational effects. Production of such technologies could provide indispensable energy and open up space exploration in a completely viable and safe manner.

The Connected Universe, a feature-length documentary film, was produced based on Nassim Haramein’s discoveries and their potential for generations to come.

ARK Crystal LLC, a 25-year project of research and development by physicist Nassim Haramein, was released in October 2017. ARK crystals are a revolutionary technology that greatly boosts the body’s natural ability to connect with the vitalistic quantum vacuum energy at the foundation of all-natural processes. This zero-point field of space is a nexus of quantum entanglement, and when the body is able to attune with it, like a crystalline oscillator, it comes into harmonic resonance with this inexhaustible source of energy, coherence, and connectedness.