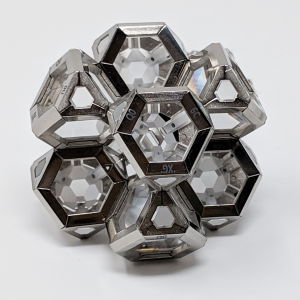 The 8 ARK crystal Geometric Assembly can be arranged in either Gravitative or Radiative orientations.

The Cuboctahedron, also known as the gravitative orientation of the eight (8) ARK crystal geometric assembly, is made of eight tetrahedrons, with the point of each tetrahedron pointing towards the center (creating an inward-directed, “generoactive” force). 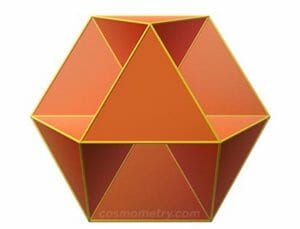 This geometric arrangement creates a state of perfect balance in what Buckminster Fuller called Vector Equilibrium.

All dynamic energy events — light, sound, a person walking, wind — have a fluctuation of positive and negative values. Light and sound waves have their frequency and amplitude, a person walking oscillates between left and right feet, the wind is a result of high and low atmospheric pressure differences. Imagine as we make those differences smaller, we come to a point of perfect equilibrium wherein all energy fluctuations achieve a state of absolute balance and the dynamic activity gets canceled out altogether. In Buckminster Fuller’s synergetic geometry, the Vector Equilibrium (VE) is the model of such a state of absolute zero-phase equilibrium. Here’s why…

This is unique from all other geometric structures, such as the Platonic Forms, which all have equal length circumferential vectors, but their central radial vectors are of longer or shorter length compared to them. As such, there’s a differential in the force values associated with those vectors.

While the outer shape of a VE is traditionally known as a cuboctahedron (having symmetries with both the cube and octahedron), it was its unique characteristic of equal length vectors that Fuller discovered in 1917 and named the Vector Equilibrium in 1940.

Start with all eight (8) of your ARK crystals laying in front of you, arrows 🔺 pointing up. This will make it easier for you to find the correct orientation as you go along.

These sets of 4 ARK crystals are the basis for your Gravitative 8 Assembly.

Take one set of four ARK crystals and place it in the palm of your hand. Place your other palm over the top of this set and then turn the set over so it is now “up-side-down”.

Gently cradle this group of 4 ARK crystals and place it on top of the other set of 4 with the edges of the ARK crystals resting on each other. You now have a Gravitative set of 8 ARK crystals.

While the gravitative arrangement can be considered complete from a structural standpoint, there is one more step involving the alignment of the ARK crystals’ piezoelectric axis or x-axis. If you want to line up the x-axis of your Gravitational 8 ARK crystal assembly, you will look for the serial numbers on the outer faces of the ARK crystals. An example of a serial number: ‘XD’ – Y0 – 42 Find the set of characters with the “quotes” around them. This is your piezoelectric axis or x-axis.

For the final step to assemble the cuboctahedron, we must align this ‘X digit’ of the serial number with the structure’s “equator.”

Start with the top hemisphere. Gently check each ARK crystal, find the x-digit, and turn it so the “quotes” are pointed to the middle of the assembly. Continue all the way around the top half.

When the top half, or hemisphere, is completed, gently flip the assembly over and repeat the process on the second hemisphere of the assembly.

You now have a completed 8 ARK crystal Gravitational Geometric Assembly.

Images and text excerpts from Cosmometry – Exploring the HoloFractal Nature of the Cosmos, by Marshall Lefferts – www.cosmometry.com